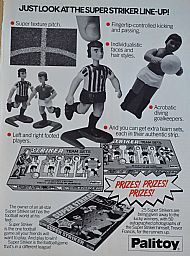 A super five a side game that was very popular in the 1970s and came in enormous boxes. Rather than show every edition and box type I have included the world cup Striker edition as representative of all the Striker versions made by Palitoy and Parker. This was the top of the range set that included a scoreboard and floodlights.

This is the full list of versions I believe:

All Star Striker
Basic version without diving goalkeepers and standard players but with a super texture pitch.

All Star Super Striker
Not sure Newcastle and Man Utd would now class as All Star!!
Could be relaunched as 'Dreary Average Super Striker' 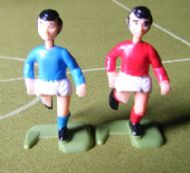 Playing pieces
The classic push down heads figures in that oh so camp pose.

Super Star Strikers
Striker figures were sold by Charbens after the collapse of Palitoy. 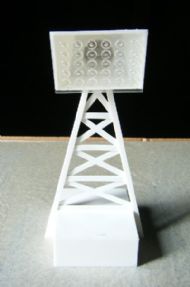 Floodlights
Shades required to deal with the glare from these beauties!

Diving goalies
The legendary Striker diving goalies - never recorded as ever having made an actual save. 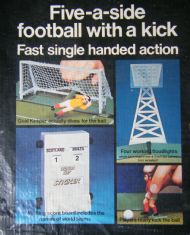 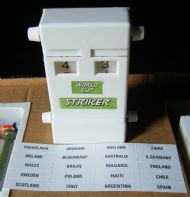 Scoreboard
The scoreboard with team names from the 1974 world cup.

Can I have this for Christmas?
How many hours were spent drooling over these ads?