I need your help. Do you know what this game was called, who made it and when it was made? Help me

Many thanks to the family of the original owner Roy Mason, a true cricketing legend for Wigston Cricket Club in Leicestershire, for passing the game on to me for the website.

The game is a classic table football 'foosball' game probably from the early 20th century judging by the kits and boots. My guess early 1920's. I have another game 'Bang It In' that uses exactly the same figure print but that does not have a makers name either.

UPDATE - Another game using identical players was posted on ebay recently with the makers name being Roberts and British made.

The mystery game
Do you know what this game was called? A tantalising mystery on the box lid.
I can work out FULL ???LD FOOTBALL so my best guesses are FIELD, WORLD, HELD, BUILD but nothing comes up on Google - help!

Edwardian table football game
A very well made high quality wooden surround with wooden poles and wooden players. Originally had baize pitch attached to the base. 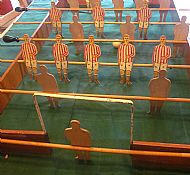 The red team
The game makes a very impressive display piece being about 120cm long and over 60cm wide with brightly coloured players. 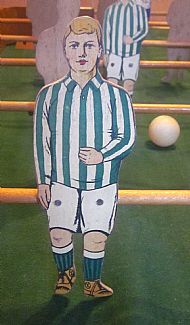 Fotheringham Smythe
Bertie Fotheringham-Smythe had not yet mastered the application of lip stick.

Playing figure
A plywood type wood with printed football figure. Do you recognise the maker or game?
Look at the boots! 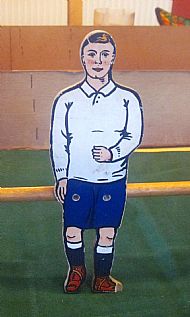 The keeper
This rosy cheeked cherub keeps goal for the red team. 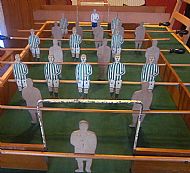 The green team
Impressive looking set up. The goals are metal hoops that hold the whole pitch together. 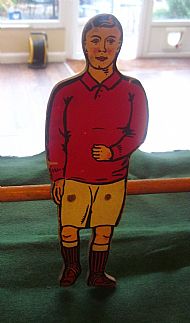 The other keeper
The green team keeper has the same laid back pose as his team mates.