Here's one right from my teenage years - the 1978 FKS Soccer Stars trumps game. Set 1 was players and set 2 was the beautiful team groups version - but where were St Etienne?

As you can see all the top teams were included - but also Bristol City and Arsenal who appeared alongside Bayern, Real, Barcelona, Liverpool, Ajax, Juventus. Quite bizarre! 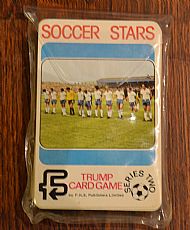 Ujpest v Ajax
Ujpest Dozsa almost cause an upset - going down 17-16 to Ajax on titles won. 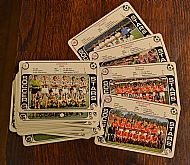 The cards
All the top teams from 1978 plus Bristol City!
No St Etienne or the Italian Milan clubs.