A latter 1990s version of the long running TAF football game series, this release was one of a number of 'local derby' sets. Although one version was just released as 'United v City' there is no doubt that it is the Manchester derby - you can even read the sponsors logos! Probably right at the beginning of usage rights issues as money swamped football.

Swindon v Tottenham
The rarest and most unusual of all sets - the Swindon v Spurs set. 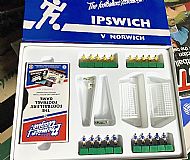 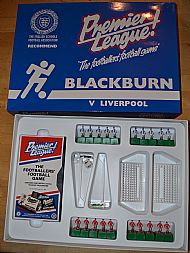 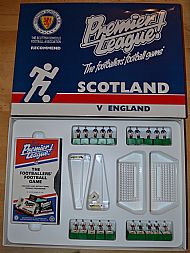 The Auld Enemy
The original derby in table football form. One of a number of local derby editions. 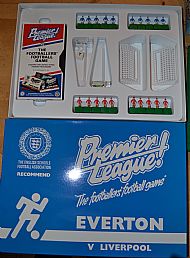 Everton v Liverpool
The Merseyside derby in table football form. One of a number of local derby editions. 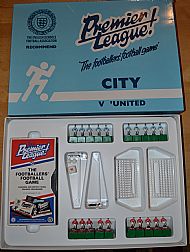 City v United
The Manchester derby in table football form. One of a number of local derby editions.

Game components
Two teams on large bases, ball, dice, goals and marked out baize pitch plus something called a video cassette and rulebook.

Manchester City
Not refered to as Manchester but just City, No doubt who this Brother sponsored team are though. 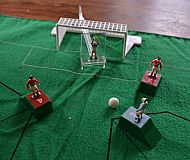 Frenetic goalmouth action
Big bloke on a base challenges two other players on big bases.