A set of cigarette type collectors cards issued in 1988 as Sutton United's Hall of Fame members. Thank you to a Sutton fan for the following information on the set.

The cards were produced as a celebration of our Cup run 88/89 culminating with the game against Coventry in January 1989. They were not endorsed as an official publication by the club, although they were sold through the supporters club at the time. The run was limited to 1000 sets only. The first print run was corrupted by a problem with the colour overlay and was subsequently re-printed with any buyers of the original set offered the corrected ones. The subjects chosen were selected from our great history and the title 'Hall of Fame' was considered an apt reflection (again not endorsed by the club). Many great players and personalities were included, and in equal measure, a number of notable figures were regrettably omitted from the final list. The cards were hand drawn by an artist who worked for a local publishing company (first name Graham, surname ?) from original images in handbooks and photographs.

24 cards of the key players, managers and officials in Sutton's history. 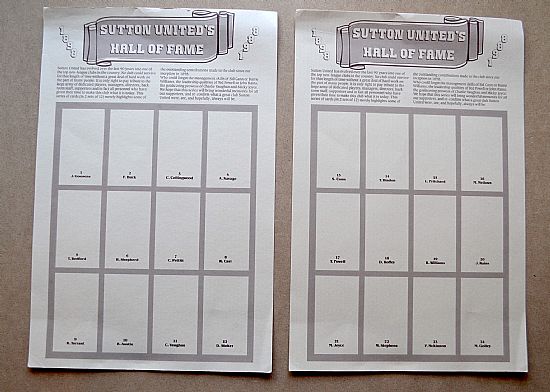 The two sheets with the cards in place.